Both Catalpas are known by various local names such as, Catawba, Indian Cigar Tree, Cigar Tree, Caterpillar Tree, Fishbait Tree, and Fishermans Tree. Catalpa is the Native American name for the trees.

The two trees are very similar in appearance. The flowers are the distinguishing difference. Both trees produce large clusters of flowers in early summer. The interior of the flowers tell the tale. The Northern Catalpa flowers are decorated with lines of lavender dots surrounding bright yellow streaks leading into the throat of the flower. 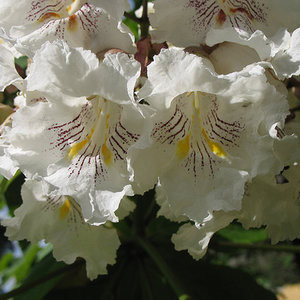 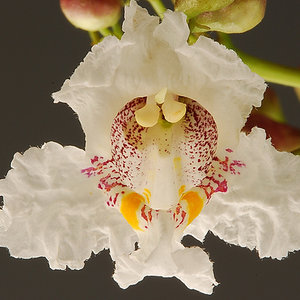 The Southern Catalpa flowers are filled with an organized splash of magenta streaks and spots surrounding golden orange lines of spots directing pollinators into the throat of the flower.

Both catalpas are large trees, 30′ to 70’tall with some reaching 100′ . The trees are rather coarse in structure with thick twigs and a distinctive, sometimes contorted shape. The large frame is clothed with equally large leaves, some a foot long and broad. The large leaves cast a deep shade.

As summer progresses, the flowers give way to long bean like pods which turn from green to a rich dark brown in fall somewhat resembling a long cigar.

The most significant pest of the catalpa is considered by some to be its greatest asset. The caterpillar of the catalpa Sphinx moth, Ceratoia catalpae.

This caterpillar can in sufficient numbers defoliate the tree. Catalpa trees quickly replace their leaves with little distress.

The wood of the Catalpa tree is light in color and relatively light in weight when dry. The wood is ring porous and has a distinct though not distracting grain. Catalpa is one of the more stable hardwoods and is very resistant to cracking. These qualities make it an excellent carving wood. It is actually favored by many decoy carvers.

On the farm , it is very rot resistant and its light weight makes it a top choice for gates and barn doors. The original range of the catalpa is small, so, lumber availability is usually through small local sawmills.