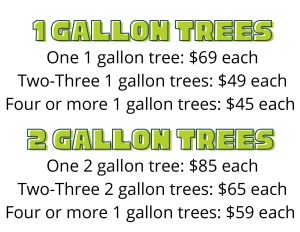 Hollies are a great and varied family of trees. They are native to many different parts of the world. Their flowers are an important nectar source for honeybees and other pollinators. Most of the comb honey produced in the United States is made in the holly thickets of the deep south.

The hollies we are most familiar with are the evergreen hollies. These are commonly seen shrubs and trees in landscapes all over the country where hollies are hardy. These hollies come from North America, Europe, China, Korea and Japan. Hollies are promiscuous and hybrids are common.

Male hollies produce a vast supply of pollen that is gathered by bees. Holly pollen is too heavy to get airborne. It takes bees to pollinate the female flowers to get berries.

The “Big Mack” holly, Ilex opaca, is a bold robust American Holly. Its medium dark green foliage is strongly highlighted with an abundance of brilliant red berries. It grows medium fast when young slowing down as it matures. Foliage is dense and the tree form is a rounded upright form. It is a picture of the holiday season holly.

We have chosen the hollies here from a large diverse planting. Our selections were made based on the best trees for leaf color,  foliage density, berry  set,  form, and overall health. We observe these trees mid winter for good persistent green color through the winter months.

The Cave Hill #2 Holly was selected from trees growing in the famous Cave Hill Cemetery in Louisville Kentucky.  This American Holly, Ilex opaca, was chosen for its good form, lustrous foliage and brilliant red berries. This selection is widely grown. Cave Hill #2 has a dense growth pattern. The trees are full, dark green with a heavy berry set. All female hollies benefit from having a male nearby.

Klein 10-26 is an American Holly selected by Theodore Klein for its healthy dark green foliage and bright red berries. The tree is nicely shaped and holds its color through the winter. Growth is vigorous and dense.

This female holly sets a medium number of bright red berries that hold well on the tree until the birds get them in late winter.

If there are no other American Hollies around, it will need to be paired with a male like Big Al in order to have berries. The bees will work the flowers whether a male is present or not.

This will make a nice dense green holly.

The Maniq Holly  is unique among American Hollies for its dark green foliage and heavy berry set. Its lusterous leaves hold their color throughout the winter months while most American Hollies take on a yellowish cast. Plenty of bright red berries contrast with the shiny green leaves to cheer up those cold winter days. Late in the winter season, Robins and Cedar Waxwings descend on this holly to devour those red berries in preparation for spring breeding.

The Rosebank Holly is on the site of the old Rosebank Nursery in Nashville Tennessee which according to their claim was the oldest nursery in the south. This majestic holly is growing in what was my great grandfathers front yard. My first tree climbing experience was in this great old holly tree. The tree is at least 100 years old and has survived at least two major tornadoes. It is still full to the ground with healthy foliage. It is a light berry producer with healthy foliage that holds its color well through the dreary days of winter.

Xanthawood Holly has a heavy crop of orange berries every year. Combine these with healthy foliage and you have a holly that is a great contrast to the traditional red berried hollies. A lovely tree.

The Yellow Jacquet Holly has an unusual tight narrow upright form. The foliage is a little less dense but it has an abundance of yellow berries. A good holly for a tight place.

Densa Inkberry Holly, Ilex glabra is a native holly that grows naturally from Nova Scotia to Florida and west to Mississippi. It is hardy in zones 4 to 9.

Inkberry Holly is grown as a landscape plant for its glossy dark green foliage. Some selections grow thickly enough to be a substitute for Boxwoods. It is desirable for its ability to grow trouble free in acid soil and in wetter conditions. We are growing a selection named “Densa” which grows 3′ to 4′ tall and as wide and has dense attractive foliage.

Possumhaw Holly, Ilex decidua, is another tree with a most unfortunate name. The name Possumhaw puts this lovely tree a preconceived bad light before it is ever given a chance. Despite a name that equates it with roadkill, Possumhaw is a truly wonderful small tree. The species name decidua tells us this is a deciduous holly. Spring brings a dark green semi-glossy thornless foliage that is soon followed by an abundance of small inconspicuous blooms that are relished by honeybees and other pollinators. Summer remains green. Fall starts the show with golden fall leaves mixed with orange or red holly berries. The berries persist through the winter giving a delightful show against a snowy background.

As winter progresses the winter birds will gradually eat the berries creating a show of their own. In the wild where it must compete for sunlight, Possumhaw can reach 30′ tall but in a landscape where it gets plenty of sunlight it will stay closer to 15′ tall. More sunlight will equal  more flowers which will mean many more beautiful red berries in winter.

It is adaptable to a wide range of growing conditions and soil types and while it can take periodic flooding, it prefers a more upland site than Winterberry Hollies. Trees are male or female with male flowers producing pollen but no berries and females producing nectar and berries. Hollies are rather promiscuous and Possumhaw will pollinate and can be pollinated by a male American Holly. Blooms from south to north as spring progresses north.

The heavy bloom on this male holly are visited by the bees for its heavy production of yellow pollen which is an important food source for bees.

One of these in a hedge of Winter Red Hollies ensures a crop of red hollyberries to brighten the winter landscape.

Winter Red Holly is a female deciduous holly selected for its brilliant red berries that hang all winter. The latin name is Ilex verticillata.

The Winter Red Holly is typically 6′ to 10′ tall but with age and good growing conditions it can reach 30′. Most will never reach such height and the tree can be pruned to control size very easily.

The red berries are born from the profusion of female flowers that are open for a week or two in June. Bees love these flowers and for good reason, they are full of nectar. The berries are a favorite of winter birds. A male tree is necessary for berries but not for flowers.

These hollies can grow in very wet places but are equally at home in most landscapes. These very hardy hollies are at home in zones 3 to 9

A hedge of Winter Red Hollies with a single Southern Gentleman male will look like a wall of red against the snow of winter.