Northern Pecan Varieties For The Mid-South

The Pecan is one of the quintessential crops of the deep south. Pecan pies and Pralines may bring to mind Live Oaks and Spanish Moss but, the pecan tree was originally a native of the Mississippi valley and it’s tributaries.Settlers found the pecan from Louisiana west to central Texas and north into Iowa. Yes, that’s Iowa in the  mid-west. 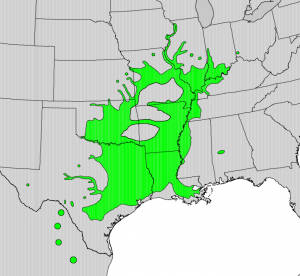 Original Range of  the Pecan Tree

The pecan tree is actually adapted to a broad portion of the country. It can be grown successfully from southern and central California through the southwest across the southern plains states and lower mid-west and up the Atlantic Seaboard to southern Pennsylvania. This means pecans can be successfully grown through most of the southern half of the U.S.

Varieties are propagated by grafting or budding a known variety onto a generic pecan rootstock. The process is to take a small branch ( called a scion) from a known variety of pecan and through precise cuts, splice a piece of that branch onto a seedling pecan tree (known as a rootstock) 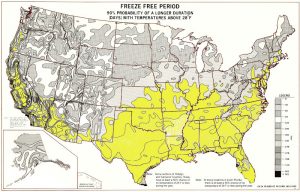 Areas in yellow have 180 or more days frost free.

Another requirement of pecan trees is a season with enough heat units to ripen the nuts. The native range is an area of consistent and persistent summer heat. Pecan trees need at least 1000 cooling degree days to ripen their nuts.

Example:  If the days high temperature is 90 degrees and the low is 70 degrees the average temperature for the day is 80 degrees.   The formula is 80- 65=15 cooling degree days. 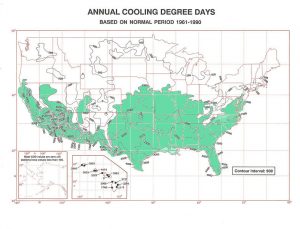 Areas in Green have 1000 cooling degree days or more

Pecan trees in their original range were best adapted to deep alluvial soils. They were most common in the river bottoms of the Mississippi and its tributaries.

Pecans will grow and produce outside those native soils. Deep soils are best, but adequate moisture is more important to fill out the nuts. Pecan roots run deep and are very powerful. They will seek out moisture if it is available.

Pecan trees are often planted in upland areas as well. These pecans survive well and often thrive, living to be very large trees. Nut production will not be optimal but certainly acceptable, especially for home use and local consumption. Home and farm plantings can be successful without irrigation so long as it is understood that dry years will yield a reduced crop.

Commercial plantings require access to irrigation. Without irrigation , during drought, a commercial planting will have a hard time being viable. Irrigation must be able to supply the equivalent of 1″ of rainfall per week. One inch of rain on 1 acre= 23000 gallons of water per week.

There are a number of pecan diseases and insect pests. Contact your states extension service for their recommendations to control these.