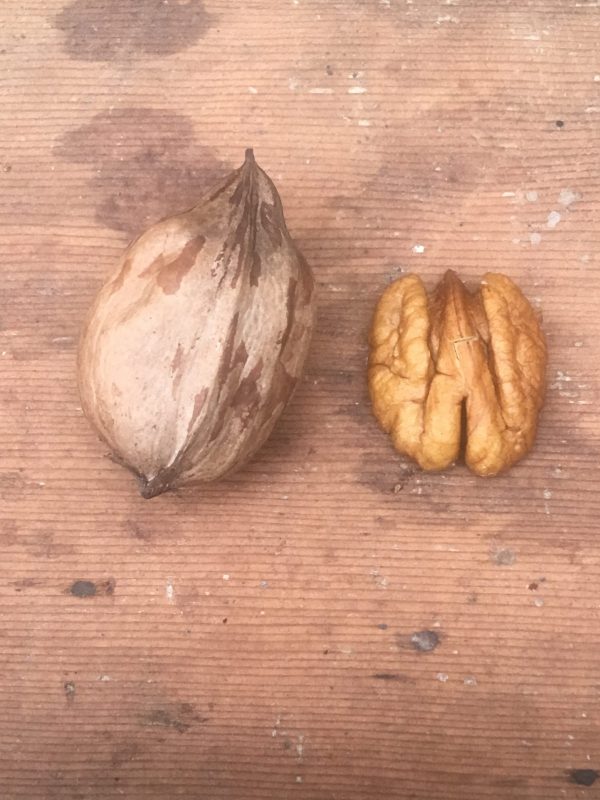 As can be seen in the picture above, Hicans share visual traits of both parents. The shell resembles the Hickory parent in shape while the outside has the distinctive Pecan “spots”. Different varieties can have dramatically different appearaces. Some look much more like Hickory Nuts. The flavor is between the flavor of Hickory Nut and Pecan. A very rich pecan flavor

Wind pollination is a very interesting phenomenon that uses air currents and electrical charges as the means of transportation and attraction. The pollen grains are of different shapes but similar enough to pollinate other species flowers within the same Genus.

In the wild, there is a vast gene pool of traits that is shared within a species. Hickory nuts usually have a thick shell and small nut meats as a percentage of volume. Some have been selected that have a larger nut size, relatively thin shells and a much larger percentage of nut meats. Wild Pecans are usually smaller than what we see for sale and the shells vary considerably in thickness paper shells being the exception rather than the rule. Kernel color also varies in both Hickories and Pecans from very blonde to a dark chocolate brown. We tend to prefer the blonde nut meats though flavor may be the same.

All this being said, not all Hicans are created equal. Some get a variety of bad traits. Many do not pollinate well with either Pecans or Hickories. Some just produce very few flowers. Poor production is the main complaint. Some have thick shells. A few however are quite good with decent nut production and good shelling qualities.

Hicans planted to make new trees will often look more like one parent or the other, Hickory or Pecan depending on what pollen they got.

Anecdotally, Hicans are hyper attractive to Pecan Weevils. Pecan Weevils are more attracted to Hickory Nuts than Pecans in nature and a Hican being a thin shelled half hickory nut is irresistable. It might be possible to use them as a trap crop around pecan orchards but one would need to be diligent about spraying for them to get any result.

Hicans are a good example of the diversity in our native nut genepool. They have a good place in the small farm orchard model providing a product that is both familiar and unique. Hicans are a good to eat conversation starter on the farm or at the market.