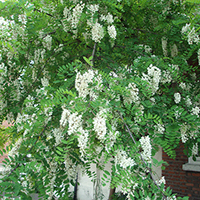 Black Locust, Robinia pseudoacacia is one of our most misunderstood native trees. It has both desirable and undesirable qualities and is useful for many different purposes. Let’s talk about this great tree.

Black Locust has been sought out for one reason or another since before the founding of the United States. Reference books show that it was originally native to the Appalachian Mountains from Pennsylvania to northern Georgia and Alabama and from the Blue Ridge west to Cincinnati Ohio with a second population in the west in the Ozark and Ouachita mountains of Missouri, Arkansas and Oklahoma. These ranges are footnoted to say that the full extent of its range are hard to verify since it was planted so widely by farmers and settlers from before the founding of the country. Why would so many people plant this tree across the frontier?

Most modern people, if they know Black Locust at all, know it as a flowering bee tree or as a weed tree. Settlers on the frontier were practical people and did things they thought would be useful and make life easier. Most settlers on the frontier had declared war on trees. They cleared the land for farming and houses. The old growth forest was dangerous if isolated trees were left for shade around the homestead. They had grown to great age in a deep forest protected from wind and when left alone in the open were no match for stormy weather. The Black Locust tree filled the bill for a frontier yard tree. They grew fast, they were intolerant of shade so growing out in the open around a farmstead was perfect for them. And finally, the wood was useful.

It was that useful wood that made the Black Locust so popular. The wood is a golden brown and hard but, the most useful property is its rot resistance. Black Locust was one of the first exports from the New World. It was perfect for Tree Nails, the wooden pegs that held the ships together that supplied the new colonies. It made sill logs. the bottom log in a log house that contacts the ground. Even today it makes a fence post that can stand 50 years, be pulled up and flipped over and last another 50 years. The wood is wear resistant and was used for wooden hinges on doors where metal hardware was scarce. It was so valuable that George Washington, our founding progressive farmer planted it at Mount Vernon.

In our modern times, Black Locust flowers are its claim to fame. For two weeks each spring these trees are covered in cascades of fragrant white flowers. These abundant flowers are filled with nectar that is gathered eagerly by honeybees. The flow is so great that in areas with many trees nearly pure Locust honey is produced. The honey is a light golden color and has an exceptional flavor. Honey alone is reason enough for beekeepers to plant this tree. The pea like flowers are subject to heavy rains which can wash away their precious nectar. A dry spring is best for the honey flow.

The wood still has value on the farm and should be in every farmers woodlot. Black Locust dense wood makes it a great firewood. It has one of the highest btu outputs of any of our native trees. For woodworkers, the rot resistance comes from the silica deposits in the wood. These deposits are hard on the edges of hand tools and sawblades alike. Regular sharpening will be necessary when working with Locust. A local sawmill will be the best place to find this wood to use. It is not common in the lumber trade.

Black Locust has thorns when young, small thorns. It is not to be confused with Honey Locust, named for the pulp from its long pods not its honey, which has long black thorns. It has a few other bad habits. Since it is a pioneer plant, it tends to sucker and become a thicket of thorny young sprouts. Cutting one down makes it particularly grouchy this way causing it to send up hundreds of root sprouts. They can be mowed down easily enough if it is in a yard but can be problematic if in an inconvenient spot. The trees also produce a lot of seeds and those seeds spread the trees to unwanted places. The seeds can also lay dormant in the soil for 50 years or more waiting for conditions to be right to sprout. For these reasons, some states, Wisconsin and Massachusetts have declared them to be invasive and do not allow them to be imported. Having said this, other states use these trees as the pioneers to reforest abandoned strip mines and other industrially damaged sites.

Black Locust, being a native tree is host to a variety of insects. It is food for several moths and butterflies one of which is a leafminer that can discolor the leaves. Another is a tip borer which can kill the ends of the branches and cause them to fall off during the summer. There is a locust borer that feeds on the sapwood and can kill a stressed tree. There are also a number of fungi that can cause cankers in the bark. All of our native trees are subject to some sort of insect and disease pressure.

There are several variety selections of Black Locust. Most are selected for tree form, thornlessness or leaf color but one, semperflorens, is for flowers. It is known as Everblooming Black Locust. This one was selected in France in the 1800’s and blooms either in spring and again in fall or sporadically all summer long

Whether for history or honey, Black Locust should be planted where appropriate. This is a bee tree extraordinaire that has many other uses

What is a Tree Without Roots