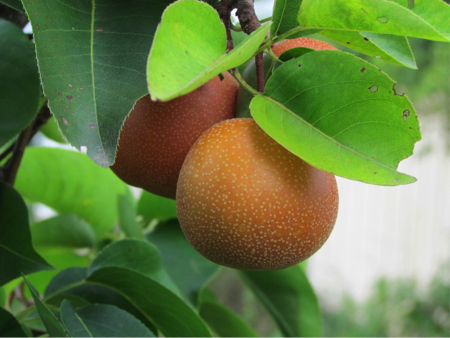 Pears are one of the easiest tree fruits to grow. They make a beautiful productive tree. Flowers in spring and fruit in the fall. What more could you ask.

So why aren.t more pears grown in the mid-south? The fear of a disease that kills some pears is the main reason. Fireblight is a bacterial disease that can kill susceptible varieties. But there are several resistant varieties of pears and these varieties will grow and thrive throughout the eastern United States.

Here are some wonderful varieties that do well in the east: Magness, Maxine, Collette, Shenandoah, Potomac, Korean Giant (Olympic),Chojuro, Keifer and Seckle

Pears can be grown with or without spraying for pest and disease. Though a limited spray program will yield prettier fruit.

Plum curculio is the major insect pest for pears. The damage curculio causes is mainly cosmetic and causes some deformity to the fruit. That said the fruit is still perfectly usable. Occasionally codling moth will attack a few of yours pears. Spraying for these would only be necessary with a sever infestation. Stink bugs cause similar damage to curculio and there are few pesticides that affect stink bugs. We have never had significant damage from them here.

Fireblight is the most visible disease in pear trees in the east. This is caused by the bacteria Erwinia Amylovora. This attacks the trees during two vulnerable periods und specific conditions.

Most often it attacks while the trees are blooming and temperatures are above 65 degrees and it.s raining. Fireblight is a water borne disease that infects the tree through open flowers or physical injury.You should not prune pear trees during periods of active growth. Infection takes about two weeks to show up. First as wilting leaves and then enter as the characteristic blackening of leaves and twigs occurs.

The other opportunity for fireblight is hail. Hail, even small pea size hail cuts the bark and allows the bacteria to enter the cambium of the tree.

The pear varieties listed here are not immune to fireblight but all are able to wall off the infection and prevent it from spreading to the trunk and the roots. The infected parts of the tree can be pruned out and burned in winter.

A spray of liquid copper before the buds open in spring will go a long way to prevent fireblight and if conditions are right for infection during bloom. A spray of streptomycin within 24 hours can limit infection. The only other diseases are purely cosmetic. Sooty blotch and fly speck are a fungi which live on the skin of the pear. They have a minimal effect on the pear itself though some people think it is unsightly.

Pear trees should be planed 16-18 feet apart. Even semi-dwarf pears get fairly large. Crowed trees are less productive. Pears are usually trained as a central leader tree. While as an untrained tree will produce fruit, one of the great pleasures of growing tree fruits is the training and shaping of a beautiful tree. Left to their own devices a pear tree will grow very upright and produce its fruit at the very tips of the tall branches. Training the tree to the central leader makes the tree fruit sooner and produce larger fruit than an untrained tree. In fruit production light equals fruit. So, branches should be selected for spacing and spreading to open the center of the tree to sunlight